One of the very first Dorie Greenspan recipes that I baked was one I found years ago in a magazine.  It was Chocolate Glazed Walnut Tea Cakes.  They were little cakes made with ground walnuts and cinnamon and unbeaten egg whites and baked in muffin tins.  They were topped with a lovely chocolate ganache.  Sound familiar?


When I first looked through Baking Chez Moi and saw the recipe for Tiger Cakes I realized that they were a wonderful variation on the Walnut Tea Cakes.  I made them some months ago and was delighted by the flavor but extremely frustrated when these tasty little goodies stuck to the muffin tins.  I made them again the very next day and generously buttered one tin and generously sprayed another.  This time, they came out fairly easily, although I had to run a blade around each cake while it was in the tin.

So yesterday when I was getting ready to bake these cakes I was well aware of the potential sticky problem.  I checked the P&Q on the TWD site and saw a great recommendation from Nancy T. to put a little bit of plain batter in the bottom of the pan.  I decided to do this in addition to spraying the tins thoroughly.

Most of them stuck really badly.  There were only three that came out unscathed after I ran a thin, sharp blade around the edges.  These three were on one side of the tin and I know that my oven heats unevenly.  So maybe these three were a little better baked.

I decided not to make the chocolate glaze this time because nothing could pretty-up the cakes that fell apart as I removed them from the pan.  I must say, however, that they are very tasty--my husband says "addictive" and he has already eaten half of them.

I do plan to bake these again but am thinking I may need to invest in a silicone mini-muffin pan.

I'm really looking forward to the experiences of other TWD bakers.  Check out their blogs here.v

Here I am with Dorie Greenspan in Seattle! 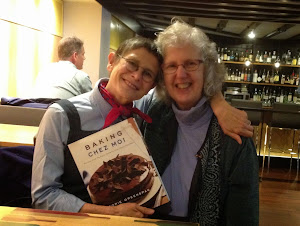 I'm a home baker who had a lot of fun and learned a great deal by baking through Dorie Greenspan's Baking from My Home to Yours. Her new book, Baking Chez Moi, was published in October 2014 and my intention is to bake through the entire book with my Tuesdays with Dorie baking pals. If you live nearby, stop by almost anytime for some home-baked treats.